One would think that with our boundless access to credible information, it would eliminate the pervasive presence of myths and old wives’ tales. Yet in 2020, some falsehoods continue to take up space in our memories and minds. Myths like ‘humans only use 10% of their brains’ to ‘if you swallow gum it will stay in your stomach for 7 years’, have been debunked time and time again, but somehow still seem plausible to a vast majority of Americans. 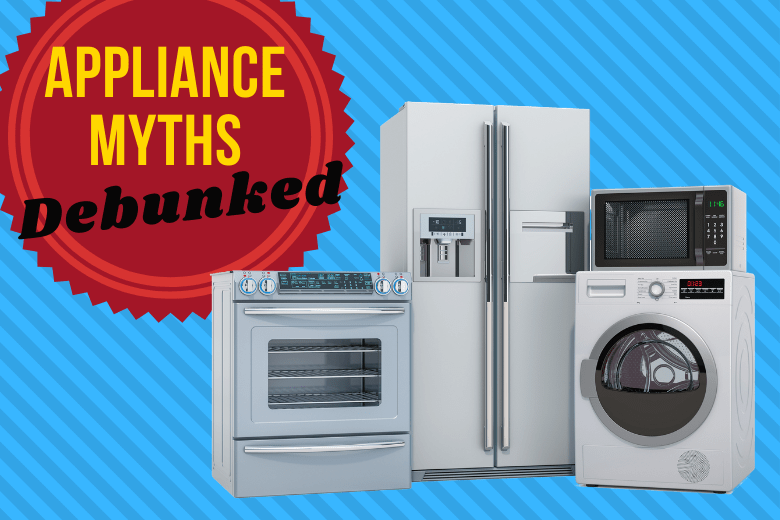 If superstitions about ravenous Chupacabras continue to hold water in certain circles, then it isn’t that surprising to find a whole host of lingering myths pertaining to everyday, household appliances. Fortunately, we’ve done the light research for you, and have come to debunk some of the most absurd kitchen appliance myths still in circulation.

MYTH #1: MICROWAVES ARE HARMFUL TO HUMANS: We wanted to kick things off with the biggest whale of a tale. This wildly elaborate myth has taken on many forms throughout the decades. Each rendition offers a more foreboding twist that has convinced some people to keep their microwaves at arm’s length.

MYTH #2: DISHWASHERS USE MORE WATER THAN WASHING DISHES BY HAND: We’re not even sure how this myth got started, but we’re here to debunk it. If you live in an older home and are without a dishwasher then you probably wash dishes by hand. Some people do that by first filling up the sink with soapy water, scrubbing off the grime, rinsing the dishes clean, and placing them on a drying rack. That would be the less wasteful way if you are without a dishwasher. If you are just allowing the water to run while you scrub each dish, forget about it. You are wasting a ton of water by washing dishes that way. The dishwashers of today actually use less water than what is required to meet the Department of Energy standards. Some dishwashers even detect whether there is a full or half load of dishes and adjust its water output accordingly. To run one full dishwashing cycle you’d use anywhere from 3-4 gallons of water. When you consider that you’ll need about 4 gallons to fill a kitchen sink, and you’ll likely fill that sink a couple of times when washing a lot of dishes, then yeah, dishwashers use less water than washing by hand. Lastly, when you consider that you may only run your dishwasher every three days, then the daily chore of washing dishes by hand seems like a huge waste of water, and time for that matter.

MYTH #3: COOKING WITH AN ELECTRIC OVEN IS EXPENSIVE: If you haven’t caught on to the common theme yet, most kitchen appliance myths were born at a time where appliances weren’t nearly as advanced. The technologies that exist today are created to have your appliances run more efficiently and use less electricity. Your refrigerator is actually the biggest offender when it comes to energy use in a home. Followed by the TV, and washing machines a close third. To put it into perspective, your refrigerator uses, on average, 30% of the total household power, while an electric oven comes in around 8%. If you are in charge of the turkey for the holidays, you’re probably only spending about 30 cents per hour for it to be in the oven. That is hardly an outlandish expense. So the next time you hesitate to preheat your oven just to bake a tiny pizza, remind yourself of this article, and shoot for the stars. You deserve it!

MYTH #4: DO DISHWASHERS FILL WITH WATER WHEN THEY ARE IN OPERATION?: This is another whopper of a tale that seems to keep-on keeping on. Although the origins of how this myth came to be is still a mystery, let’s try to end it once and for all. Yes, there are still people that think that by opening their dishwasher they will be hit by a wave of hot soapy water. This simply isn’t true. Dishwashers do have a basin that fills with water during certain parts of the cycle, but it is negligible. Your dishwasher actually works by pumping hot water through multiple jets and sprayers throughout the unit, breaking up grime and food particles. If you were to open the door, it pauses all functions. The worst that could happen by opening the door mid-cycle is a quick skirt of warm water might fly out and catch you in the eye. But that is a far cry from your kitchen flooding with soapy water. If you find yourself in a situation where you just started your dishwasher and spot a lingering dirty coffee mug you’d like to add to the wash, be a rebel and go for it. Myth busted!

MYTH #5: BAKING SODA ELIMINATES BAD ODORS FROM YOUR REFRIGERATOR: This is a rather simple one to dispel. The Food Network’s ‘The Food Detective’ confirms that while placing baking soda in your refrigerator may get rid of musty smells, it doesn’t work very well, or for very long either. To truly rid your fridge of those ungodly smells Food Network suggests using activated charcoal instead. Activated charcoal is one of the most effective odor-absorbing materials.

As you can see, logic can easily unravel these myths. Most are handed down from parent to child and the cycle repeats. Fortunately, technology has outpaced folklore and most, if not all, of your kitchen appliances are built to be energy-efficient and safe to use.

If you do have an appliance that you think has a broken seal, a faulty thermostat or simply isn’t running properly, it may be a good time to call the trusted professionals at Wilshire Refrigeration. We can be there in an instant and do a full assessment of your home’s appliances to ensure that they are in perfect working order.

Wilshire Refrigeration is the only factory certified service provider for Wolf Ranges & Wolf Built-In Ovens in Los Angeles and surrounding areas. If you need to get your Wolf Stove or Oven serviced, we’re the people to call. 877.904.1057