If you’re not currently shopping for a new oven, then you probably haven’t taken much interest in the different kinds of ovens and features that are available in the marketplace today. Ovens kind of blend in with the background, and rarely get the acknowledgment they deserve. 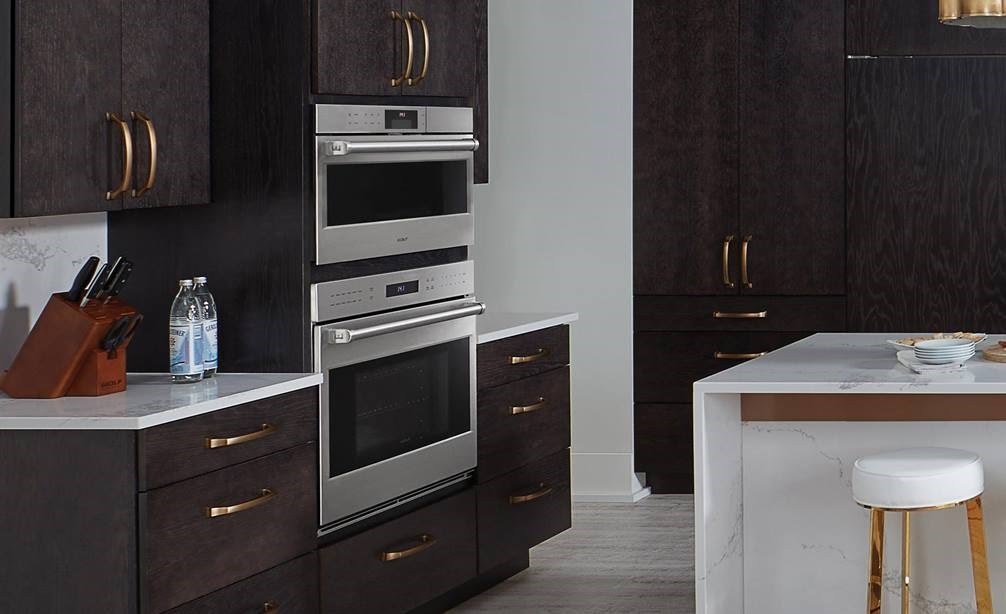 One type of oven is slightly more advanced than its counterpart, and that would be the convection oven. At first glance, you may not be able to spot much of a difference between a conventional oven and a convection oven, but when you start to peel back the proverbial layers of convection cooking, you’ll see how genius it is.

One of the most significant differences between convection ovens and conventional ovens is the way heat is distributed. Traditional ovens have two stationary heat sources. One that bakes from below, and a set of heating coils that broils from above.

Convection ovens, however, have a centralized fan and exhaust system that circulates hot air evenly throughout the oven. This allows for all food to cook equally no matter what rack you place it on. Convection ovens eliminate hot and cold spots, that ensures accuracy and continuity when cooking. In some convection ovens there is even a third heating element known as ‘true convection’. This feature not only cooks food evenly, but more quickly.

Because convection ovens operate with a fan and exhaust system, they are able to reduce the amount of moisture in the oven as well. This helps give your food a golden crispy outside, while staying juicy on the inside.

You’re probably wondering why anyone would choose to cook with a conventional oven ever again. Convection cooking sounds superior to thermal cooking, right? Well, it isn’t as if conventional ovens aren’t adequate and functional… They just take a little longer to get the job done.

When you’re cooking with a traditional oven that is devoid of a convection setting, you have to plan accordingly. For baking, you would rely mainly on the bottom heat source. For crisping or browning the tops of dishes, for instance, a casserole, you would want to place it closer to the broiler that is located on the ceiling of the oven.

Not surprisingly, most recipes are written for conventional ovens, so people are naturally more comfortable with a traditional oven. You’ll have to adjust cook times if you are attempting to bake something in a convection oven. Without prior knowledge of how to do so, you could mistakenly overcook your dish.

So what oven is the best for your household and cooking style? Is it time to make the leap into the land of convection ovens? Let’s take a look at some advantages and disadvantages of Wolf convection ovens to see how it stacks up.

What Are the Advantages & Disadvantages of Convection Cooking?

By now you’ve probably seen that there is a multitude of benefits for cooking with a convection capable oven. The benefits of convection cooking are as follows…

The disadvantages are hard to come by with convection ovens, but here goes…

How to convert recipes for convection cooking

Switch on the convection setting for most cooking, baking and roasting needs. It is ideal for perfectly cooking meats, vegetables, casseroles, pies, and pastries. When it comes time for the holidays, convection cooking can be a saving grace. Convection ovens flawlessly prepare turkeys, hams, and roasts.

1st Step: If you are following a recipe be sure to adjust your cook time for the convection setting. As previously pointed out, most recipes are tailored for conventional cook times. A quick Google search should reveal some awesome convection oven recipes to follow, along with recommended temperatures and times.

2nd Step: The general rule of thumb for adjusting the temperature for convection cooking is to subtract 25°F from the listed temperature on the recipe. This can vary depending on the size of the convection oven but usually is within the 25°F range.

Note* For more delicate dishes like custards, tarts, and quick bake breads, it may be best to use the conventional oven setting.

How to Care for Your Convection Oven

Taking special care of your Wolf convection oven is important. Just like any other kitchen appliance, you’ll need to clean it regularly, especially after busy times of the year like holidays or after you throw a dinner party. Routine cleaning and maintenance will ensure the longevity of your convection oven, as well as making sure your food comes out just right every time.

Step 1: Gingerly remove the oven racks from your Wolf convection oven and set them aside for the time being.

Step 2: Use a mild soap and water or oven cleaner to properly clean the interior of the oven. If you are using a chemical oven cleaner, follow directions accordingly and remember to wear gloves. In messier ovens or for tough to clean grime, allow for the soapy solution or oven cleaner sit for 20 mins before wiping clean.

Step 3: After allowing the solution of your choice to sit for a second, or up to 20 minutes, it’s time to put a little elbow grease into it and scrub. When you’re applying pressure, try to follow the grain of the interior oven coating and polish. You’ll want to TRY to preserve the coating as much as possible while still effectively cleaning it.

Step 4: Now that you have scrubbed away any debris or grime, use clean water to wash the interior of your oven so you aren’t leaving behind any chemicals or soapy residues.

Step 6: Turn your attention back to the oven racks. Clean them with either the water and soap solution or a chemical cleaner. Wipe clean and replace.

Congrats! You’ve successfully cleaned your Wolf convection oven and are ready to get cookin’ again.

Wolf Has an Entire Line of Convection Ovens to Choose From

If you have decided to switch to convection style cooking or purchase a wolf range and oven with the convection setting as an option, it will be helpful to keep Wilshire Refrigeration on speed dial. Wilshire Refrigeration specializes in servicing and repairing Wolf appliances, ovens and ranges. If you have any questions regarding your new Wolf convection oven, give us a call. We’re happy to answer any questions you may have.

Wilshire Refrigeration is the only factory certified service provider for Sub-Zero refrigerators and Wolf Ranges in Los Angeles and surrounding areas. If you need to get your Wolf Range or Wolf Convection Oven serviced, we’re the people to call. 877.904.1057