Skip to content
We are open and taking all necessary precautions about COVID-19, we will be fully protected while servicing your home.
Cool Refrigeration Technology

Home refrigeration remains a major contributor to residential energy consumption. A fridge from the mid-1980s used about 1,400 kWh/year. By comparison, modern energy-efficient units use around 35 kWh/year. Today’s refrigerators use about 75% less energy than they did over 30 years ago, but more efficient technologies existed before then. Researchers are re-exploring some of these concepts to develop even more efficient refrigeration technologies than there are today. 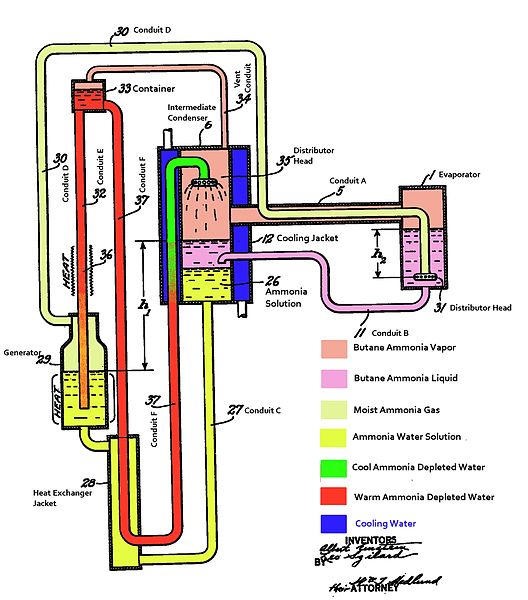 In 1922, two students from the Royal Institute of Technology in Stockholm, Sweden, invented an absorption refrigerator. Swedish company AB Arctic put their invention into production in 1923, and was purchased by Whirlpool in 1925. Albert Einstein modified the design, which had no moving parts and didn’t require electricity. The fridge produced cold from a heat source like propane or kerosene, so it required a gas line connection.

Einstein’s refrigerator had a condenser, evaporator, boiler, and absorber. Charged with ammonia, water, and butane, it was patented in 1930, but was shelved when freon refrigerants became standard during the Great Depression.

A lot has changed since the 1920s and 1930s, but some engineers are going back to the drawing board. One of them is Malcolm McCulloch; the electrical engineer based in Oxford has figured out a way to replace the ammonia gas and increase the efficiency of Einstein’s concept four-fold. With no moving parts and a solar powered heat pump, the design would require no maintenance.

Green technology apparently isn’t as new as many people think. The idea of magnetic refrigeration stems from research conducted in the early 20th century. Working magnetic refrigerators were built by 1933 and could reach temperatures below -458.86°F. They contained gadolinium metal, which heats up when a magnetic field is applied, and cools down when that field is removed.

A permanent-magnet refrigerator that can function at room temperature, developed by Astronautics Corporation of America, has been demonstrated by the U.S. Department of Energy’s Ames Laboratory. It eliminates superconducting magnets used in earlier models. The magnetic field and metal alloy replace the gas used in most refrigerators. First tested in 2004, the technology is undergoing additional testing to determine how to apply it to home refrigerators and other applications such as air conditioning, fluid chilling, and electronics cooling.

A system developed by GE labs uses a magnetic material to achieve cooling at 20% more efficiency than current technologies. A water-based fluid flows through a series of magnets. Heat is transferred in a similar way to how chemical refrigerants accomplish this; thereby providing cooling without adding energy.

The technology has been improving. While a research team achieved 2°F cooling within five years, adding a new nickel-manganese alloy for magnets (able to work at room temperatures) dropped temperatures by 80°F. To achieve this, magnets were combined in a series of 50 cooling stages. The next step is to drop the temperature by 100°F using less power.

Today’s Sub-Zero refrigerators include efficient models and innovative designs that can keep food fresh for longer. Although they’re not the future of magnetic refrigeration, these appliances come as built-in and custom-fit models that can be configured to suit any household. And with proper maintenance and service, refrigerators can be made even more efficient and longer lasting to save customers money.